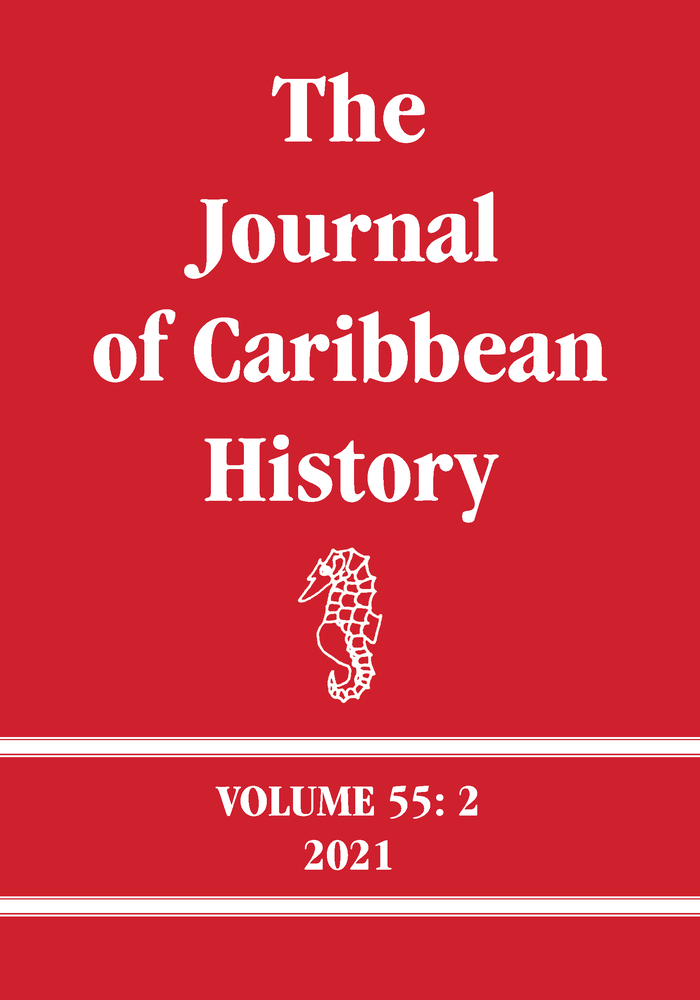 Sir William Young’s book An Account of the Black Charaibs in the Island of
St. Vincent’s has been the primary historical source about the Black Caribs’
ethnogenesis and Vicentinian history for many years. This essay critically
examines the book’s historical inconsistencies and fabrications. Restating
such claims in published works has shaped how the Black Caribs’ present-day
descendants, the Garinagu, have come to understand their ethnic origins and
identity. This work contributes to a small body of critical interdisciplinary
historiography that challenges the master narrative that British colonizers
wrote about the Black Caribs and the ethnohistory of the Lesser Antilles.

2 | “The Protection of Slaves and Other Property”: An Anglican Minister, Criminal Charges, and White Planters’ Fears of Emancipation in Barbados
by Matthew Blake Strickland

In 1827, the churchwarden and vestry of the parish church in St Lucy, Barbados,
brought criminal charges against the rector, Rev. William Marshall
Harte. They argued that he used his religious position to undermine the racial
distinctions of Barbadian society. These charges occurred within the context
of metropolitan debates surrounding slavery, amelioration, and emancipation.
Using data drawn from Treasury records and papers in the Colonial Office,
this article shows that white proprietors accepted Christian instruction for
their enslaved people, as Anglican clergy generally preached the compatibility
of Anglicanism and slavery. Indeed, they often adopted religious instruction
to promote “docility” and “deference” among enslaved people. However, they
sought to quash any actions or rhetoric by Anglican ministers that might
hinder the enslaver–enslaved power dynamic, the foundation for maintaining
the institution of slavery. While Harte fiercely denied the charges, the actions
taken against him reveal this to be a late-stage offence by white planters in the waning years of slavery in the British Empire. Ultimately, this article argues
that, in the lead up to emancipation, white colonists took physical and legal
actions to curtail anti-slavery rhetoric that propagated from the metropole in
the hopes of maintaining the institution.

3 | Play Ball! The Gómez Dictatorship and the Development of Baseball in Venezuela,1909–1935
by Jane M. Rausch

In the first decades of the twentieth century, the adoption of baseball as a
national sport spread quickly throughout the Caribbean. Juan Vicente Gómez,
who ruled Venezuela with an iron hand from 1908 to 1935, supported its development by assuring that the teams he and his sons owned won the contests in which they participated. A review of available literature suggests that his encouragement of baseball, even on his own terms, proved an effective way to distract the general population from the otherwise ruthless tactics he employed to keep his government in power.