a journal of Caribbean culture 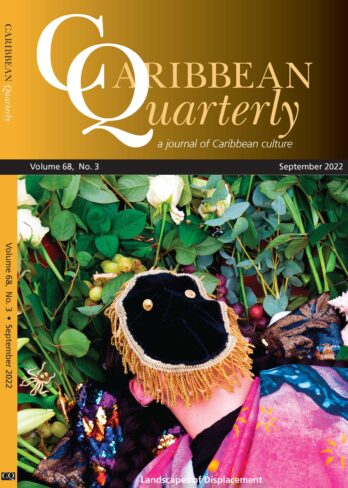 Throughout the Caribbean there are groups of men and women who are coming together to learn – to deepen their intellectual interests, to find out through discussion and reading more about themselves, their history, the lands in which they live, the world round about them. This journal is published for these men and women . . . for all men and women who seek after knowledge; to be a bond between them, and to give them information about each other. [CQ] . . . will aim at accuracy, objectivity, and clean thought, clearly expressed. Above all it seeks to establish and strengthen the tradition of the book and of learning in the Caribbean.

Caribbean Quarterly (CQ) is one of the oldest periodicals in the English-speaking Caribbean. Regarded as the flagship publication of the University of the West Indies (UWI), it was launched by the then Department of Extra Mural Studies, UWI, in 1949, to be a platform from which research findings and general knowledge could be effectively disseminated within the campus and non-campus territories. Professor Rex Nettleford served as editor of CQ for forty years, until his death in February 2010. CQ was produced under the umbrella of the Vice Chancellery until August 2021, when it moved to join the family of journals at the UWI Press. In January 2016, CQ entered into a publishing partnership with Routledge/the Taylor and Francis group. Through this partnership CQ has extended its global reach significantly.

CQ concerns itself with all aspects of Caribbean culture, in all its interdisciplinary ramifications. It is an outlet for the publication of results of research into, considered views on, and creative expressions of matters Caribbean. CQ publishes scholarly articles, personal and critical essays, public lectures, poetry, short fiction and book reviews – a lively diversity of types of writing reflecting the diversity of Caribbean culture. We invite original (previously unpublished) submissions on topics which are of general interest and relevance to the Caribbean. All scholarly articles are peer-reviewed: we insist on scholarly rigour, but we also encourage accessibility and discourage excessive use of academic jargon. Our aim is to produce high-quality material that can be understood by well-educated people from any discipline. Overall, we seek to paint a vivid picture of life in one of the most culturally diverse parts of the Western hemisphere, with information on its social and material culture, ethnology, history, peoples, religion and creative arts presented in a refreshingly accessible format.

Back issues are available.

All submissions should be sent to:

For more information, please refer to the guidelines at the back of this publication;  also see www.tandfonline.com/rcbq, or http://www.uwi.edu/cq/default.aspx