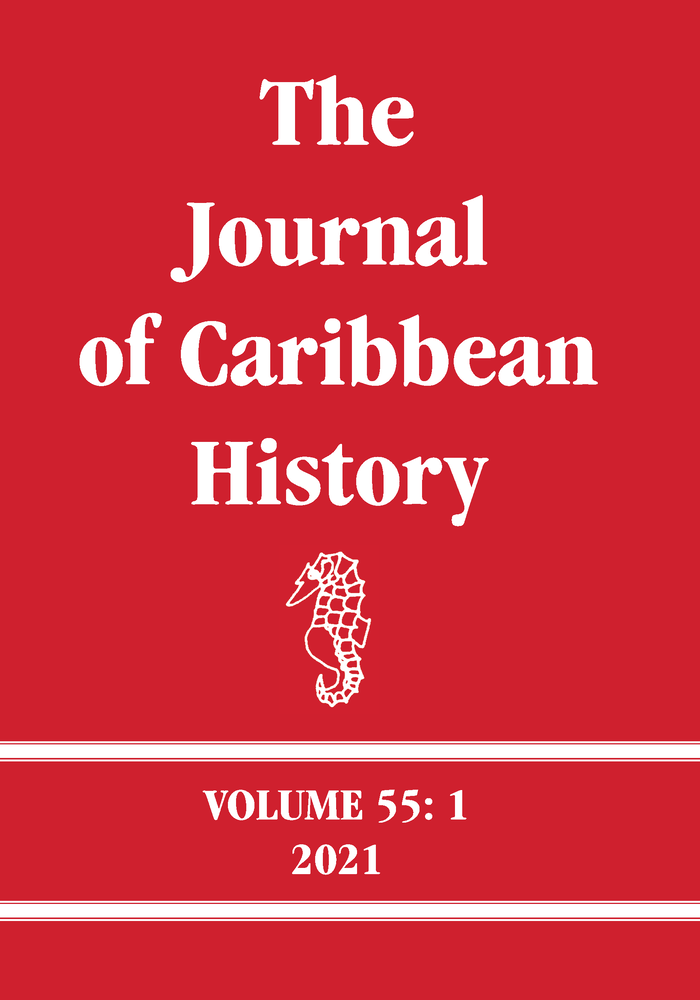 This article presents Guadeloupe as a case study with a focus on its early settlement era (1635–1660), prior to the advent of the sugar industry. It is an often-overlooked period and locale within French Caribbean historiography, with little available literature in English. The colonization of Guadeloupe in 1635 was especially more chaotic and conflict ridden than that of St Christophe and Martinique, France’s earliest settlements. The article further examines how Guadeloupe’s unstable beginnings contributed to her sluggish economic development and undermined her status as a colony for more than a century after the arrival of the first French settlers.

2 | How to Control the History of a Slave Rebellion: A Case Study from the Sources of Blackwall’s Revolt in St Mary’s Parish, Jamaica, 1765
by Devin Leigh and Clifton E. Sorrell III

Enslaved people in Jamaica staged a series of insurrections from 1760 to 1766 that challenged British colonial authority. Much attention has been paid to the first and largest of these insurrections, popularly known as Tacky’s Revolt. Far less has been written about a subsequent event from 1765. Although minor in scope and impact, Blackwall’s Revolt is important because it resulted in an unusually detailed textual archive. This archive provides a unique opportunity to see how planters forced their knowledge of slave revolt into established narratives, meant to advance the politics of colonial society. The following article examines that process through discussions of rebel leadership, gendered resistance, and slave–Maroon alliance.

3 | “The Scale of Punishment Has Been Framed Specially for the Black Man”: Imprisonment, Race, and Punishment in the Colonial Bahamas, 1840–1973
by Anne Ulentin

This article investigates the establishment of a prison system in the post-Emancipation Bahamas and the resulting mass incarceration of the Afro-Bahamian population throughout the colonial period. As race and racial ideas shaped the perception and fear of crime, the prison became the quintessential space of confinement and punishment. Other mechanisms, including hard labour and whipping, were also used in tandem to discipline and exert control over the population. As a result, the colonial elites effectively used the penal system to reinforce their position within the society and the perpetuation of the social and racial order that existed before Emancipation.

4 | Memory, Memorializing and Martyrdom in Post-Revolutionary Grenada
by Candia Mitchell-Hall

On 13 March 1979, the small island of Grenada in the Eastern Caribbean staged a big uprising known as the Grenada Revolution (1979–1983). That uprising saw the ousting of the then prime minister Eric Matthew Gairy by the socialist opposition party, the New Jewel Movement led by the young,
popular, and charismatic lawyer Maurice Bishop. But after four years of running the country under the People’s Revolutionary Government, the revolution imploded on itself when Prime Minister Maurice Bishop along with his government ministers and supporters were killed at Fort Rupert on 19 October 1983. Since then, several memorials have been erected to the memory of Bishop and by extension, the Grenada Revolution. But not everyone wants to remember Maurice Bishop and the Grenada Revolution. The nation is polarized over the Grenada Revolution, and particularly the events of 19 October 1983, and grapples with its memory and re-memory decades after. This paperis interested in how memory, memorializing and martyrdom intersect in the post-revolutionary state.