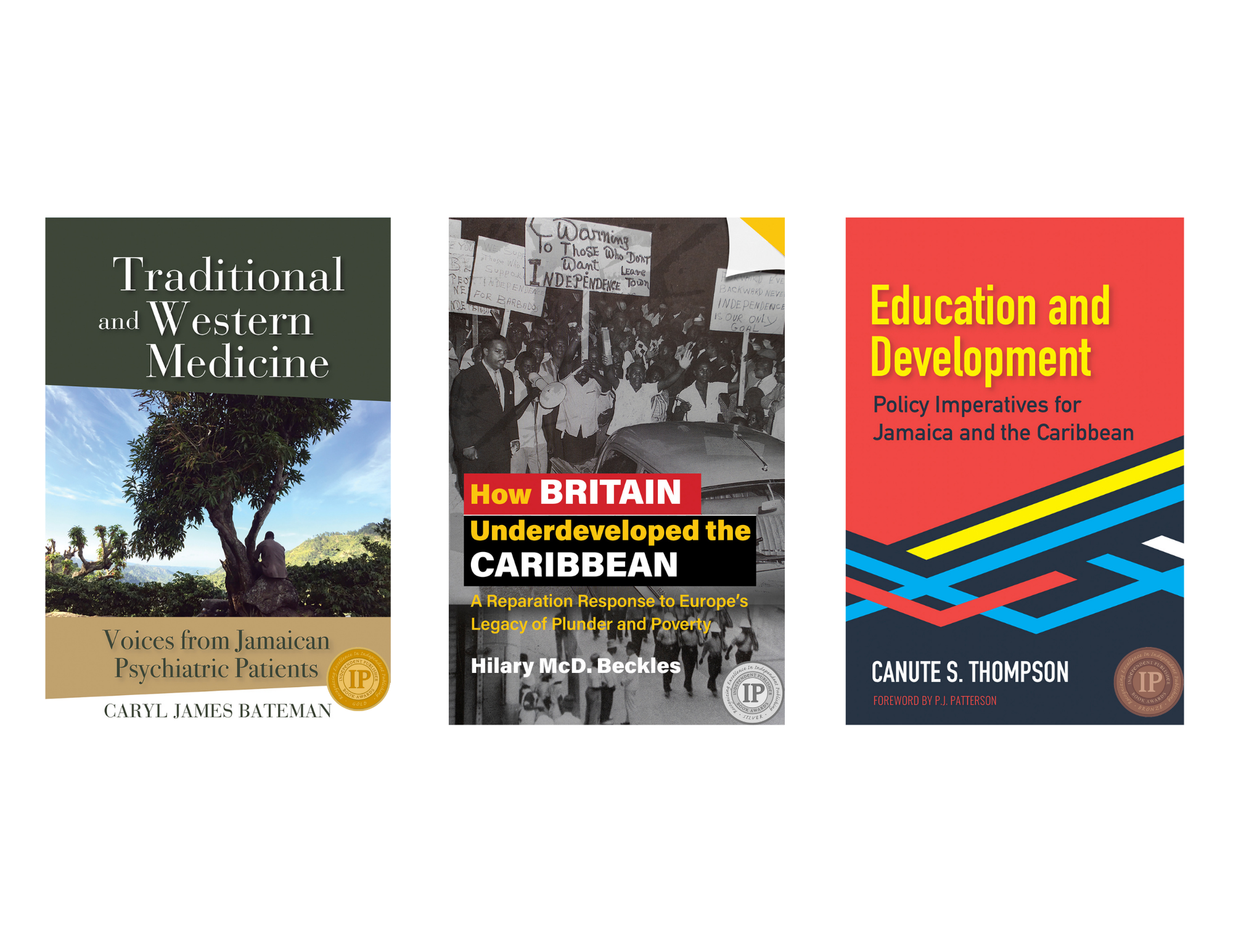 The UWI Regional Headquarters, Jamaica. W.I. Friday, 27 May 2022. — The University of the West Indies Press (UWI Press) is pleased to announce that earlier this month, three of its published books were recognised internationally by the Independent Publisher Book Awards (IPPY Awards).

Traditional and Western Medicine: Voices from Jamaican Psychiatric Patients by Dr Caryl James Bateman received the gold medal in the Psychology/Mental Health category; How Britain Underdeveloped the Caribbean: A Reparation Response to Europe’s Legacy of Plunder and Poverty by  Professor Sir Hilary Beckles received the silver medal in the History (World) category and Education and Development: Policy Imperatives for Jamaica and the Caribbean by Dr Canute S. Thompson was named bronze medallist in the Education II (Commentary/Theory) category.

Established in 1992, the UWI Press is a not-for-profit publishing agency managed by The University of the West Indies, which specialises in publishing scholarly books and journals across sixteen disciplines. UWI Press books and authors have received over 100 local, national and international awards and recognitions. These awards have been given for scholarly, editorial, design, production, and marketing excellence.

In response to the IPPY Awards news, Mrs. Nadine D. Buckland, Acting General Manager, of the UWI Press said, “As a regional publisher operating in the global publishing world, we are delighted with the recognition from the IPPY awards. It highlights the high scholarly standards, the reputation built, the synergy of commerce and content, and the work of a dedicated team. As the UWI Press celebrates thirty years in scholarly publishing, this recognition validates the vision of our founding leaders and serves as a catalyst for the future of the UWI Press as the premier scholarly books and journals publisher in the Caribbean.”

An estimated 2,400 publishers enter the IPPY awards each year, from North America and English-speaking countries worldwide. The complete list of medallists of the 2022 Independent Publisher Book Awards can be accessed here.

The UWI Press and the wider university community congratulate the authors on their outstanding contributions to global literary excellence.

Notes to the Editor

The Independent Publisher Book Awards were conceived in 1996 as a broad-based, unaffiliated awards program open to all members of the independent publishing industry, and are open to independent authors and publishers worldwide who produce books intended for an English speaking audience. We define “independent” as:

About The UWI Press

The mission of The UWI Press is to be the premier scholarly book publisher in the Caribbean, to enhance and encourage research and publication of Caribbean scholarship, to promote the global reputation of the University of the West Indies by empowering the scholarly community it serves, and to disseminate Caribbean scholarship to the world within a cost-effective environment. For more, visit www.uwipress.com

The UWI has been and continues to be a pivotal force in every aspect of Caribbean development; residing at the centre of all efforts to improve the well-being of people across the region.

From a university college of London in Jamaica with 33 medical students in 1948, The UWI is today an internationally respected, global university with near 50,000 students and five campuses: Mona in Jamaica, St. Augustine in Trinidad and Tobago, Cave Hill in Barbados, Five Islands inAntigua and Barbuda and itsOpen Campus, and 10 global centres in partnership with universities in North America, Latin America, Asia, Africa and Europe.

The UWI offers over 800 certificate, diploma, undergraduate and postgraduate degree options in Culture, Creative and Performing Arts, Food and Agriculture, Engineering, Humanities and Education, Law, Medical Sciences, Science and Technology, Social Sciences, and Sport. As the Caribbean’s leading university, it possesses the largest pool of Caribbean intellect and expertise committed to confronting the critical issues of our region and wider world.

The UWI has been consistently ranked among the top universities globally by the most reputable ranking agency, Times Higher Education (THE). In the latest World University Rankings 2022, released in September 2021, The UWI moved up an impressive 94 places from last year. In the current global field of some 30,000 universities and elite research institutes, The UWI stands among the top 1.5%.

The UWI is the only Caribbean-based university to make the prestigious lists since its debut in the rankings in 2018. In addition to its leading position in the Caribbean, it is also in the top 20 for Latin America and the Caribbean and the top 100 global Golden Age universities (between 50 and 80 years old).  The UWI is also featured among the leading universities on THE’s Impact Rankings for its response to the world’s biggest concerns, outlined in the 17 United Nations Sustainable Development Goals (SDGs), including Good Health and Wellbeing; Gender Equality and Climate Action.